From Child Refugee to President

The little girl who fled from war-torn Latvia spent more than 50 years in exile - but soon after returning she became president.

Not only that, Vaira Vike-Freiberga became the first female head of a former Soviet bloc state.

"My parents never let me forget that I am Latvian," she told the BBC.

The Baltic state was invaded by Nazi Germany and the Soviet Union during World War Two. 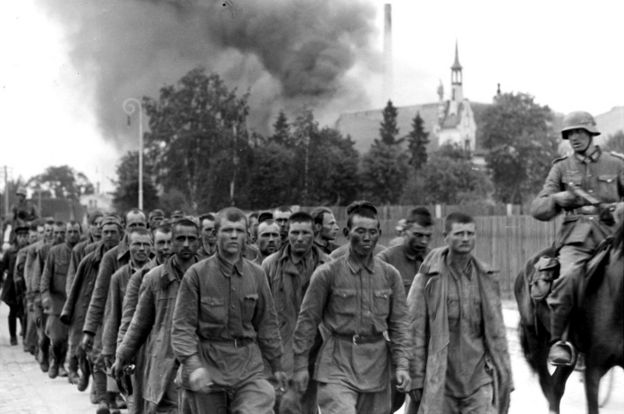 She has vivid memories of that chaotic time, especially 1944, when Russian troops - the communist Red Army - marched back into Latvia.

"I was impressed by the ones with the red flags and the fists. So at one point, as one of them marched by, I raised my fist in the air and shouted 'hurrah!'," she says.

"At that point I saw my mother lean against the lamppost, absolutely stricken, with tears streaming down her cheeks, saying 'Please, child, don't do that. This is a very sad day for Latvia'."

The family's odyssey westward took Vaira, aged seven, first to devastated Germany. Then they moved to French-ruled Morocco, then to Canada.

She did not return to Latvia until 1998, aged 60, and became president within eight months. 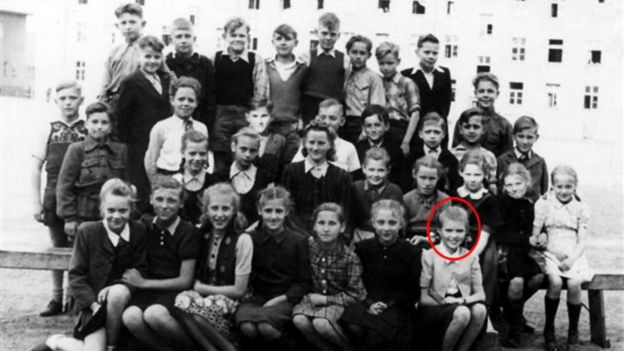 Vaira remembers her father listening to the BBC World Service in 1944, desperately trying to fathom where the war was heading.

Later that year her parents made the agonising decision to leave Latvia.

"We took the ship on New Year's night of 1945. It was a transport ship with troops and with armaments and of course if it gets torpedoed it's going to blow it up. But they have taken a certain number of civilians with them, who also want to flee from communism at any price. Latvians gathered on the deck and sang the Latvian anthem."

The family reached the refugee camps being set up across Germany. The conditions were very harsh and her baby sister fell ill with pneumonia and died, just 10 months old.

Within a year Vaira's mother gave birth again, to a baby boy. But for Vaira the event was overshadowed by another cruel life lesson.

"A young girl of 18 was lying in the same room with my mother. She had given birth to a little girl and didn't want her. She didn't want to name her child and she didn't want to have anything to do with it, because the child was the result of a group rape from Russian soldiers," she says.

"Each time the nurses brought that poor child to the mother, she would turn her face to the wall and cry and refuse to talk to her. The nurses gave a name to the girl - Mara, which was my sister's name.

"And I thought that was really too much, because here was a Mara who was born, who was surviving and who was absolutely not wanted in this world. And our Mara, whom we had wanted so much, was taken from us. I realised that life was really very strange and certainly very unfair."

At the age of 11, Vaira had to move again, to Casablanca in French Morocco. 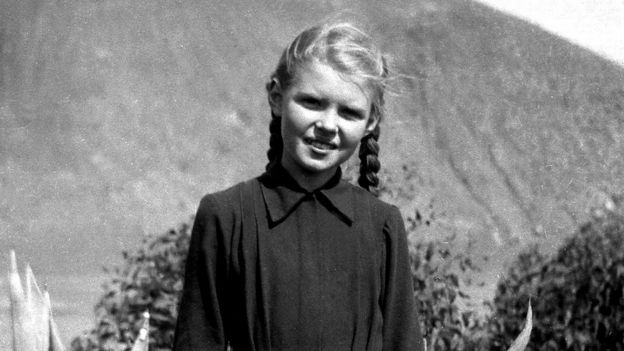 "We were thrown out, as it were, from a truck in the middle of the night in what turned out to be a small, temporary village. It was a world in miniature," she says.

"There were French people there, there were all sorts of foreigners, Spaniards from the time of the Civil War, Italians and old Russian émigrés from the European quarter in Shanghai."

One of her father's Arab co-workers said she was ready to be married off, though she was just a child.

"Dad would come home and he's saying, 'He's giving me 15,000 francs dowry. And he offered me first two donkeys and cattle and then later he kept upping the price and I said, but she's just a child and she has to go to school.' He said, 'That's all right, we're willing to let her finish school'."

Her parents laughed at that, but Vaira was alarmed.

Soon however the family moved to Canada.

Vaira got a job at a bank, aged 16, and went to night school. She eventually made it to the University of Toronto. And while there, she met the man she would marry, Imants Freibergs, another Latvian exile.

She studied psychology and was eventually awarded a PhD, in 1965. But she says her choice of subject was simply "the fickle finger of fate". 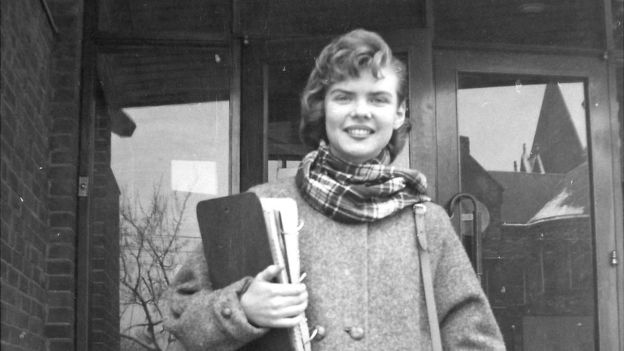 "The registrar had a list of subjects and I looked at it upside down and I saw something, a long word starting with P and ending in Y, and I put my finger on it and said, 'Sir, this is the one I want to take'."

She learned quickly though that women were tolerated, rather than welcomed.

"Our dear professor at one point in a seminar said, 'Yes, well, we actually have three married women here in this PhD programme, it's such a waste, because they're going to get married and they're going to have children, and they're actually taking up a place that a boy could have taken who will become a real scientist.'

"And all of us girls in that seminar, we remembered that for the rest of our lives."

She says they resolved to show that sexist professor "that we women can succeed even better than his favourite boys".

Vaira spent 33 years at the University of Montreal. She became fluent in five languages and wrote 10 books.

In 1998, aged 60, she was elected professor emeritus and decided to retire.

But one evening her phone rang. It was the prime minister of Latvia. And Vaira got the offer to head a new Latvian Institute.

She was told they wanted "somebody actually from the diaspora who is multilingual, understands Western mentality, but also with good understanding of Latvian culture".

But almost immediately she found herself caught up in Latvia's presidential race.

She gave up her Canadian passport to run for election and, just eight months after returning, she became Latvia's first female president. 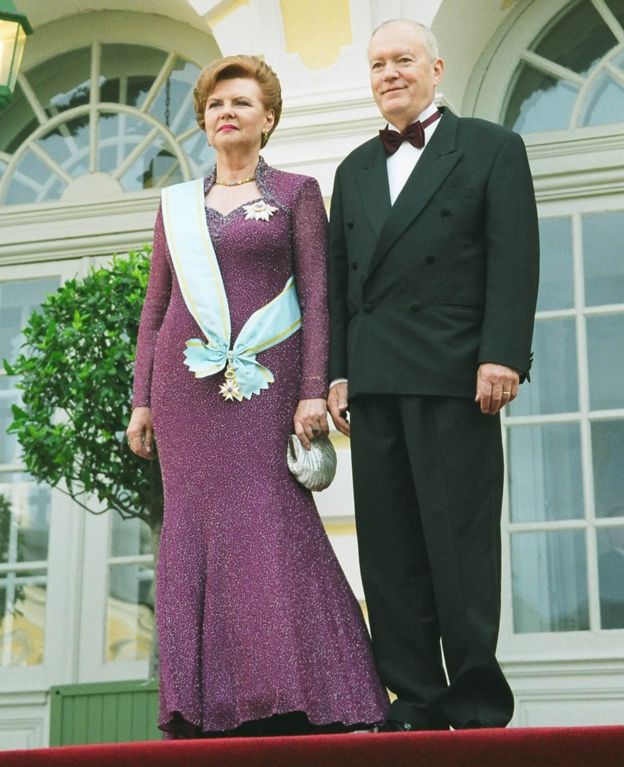 At one point her approval ratings soared to 85%.

"I was somebody who was not interested in making money or anything like that, but simply in doing a job.

"And there was great enthusiasm amongst certain newspapers to find things to criticise, for instance, that I was a great spendthrift, having lived a life of luxury in the West. Complete fabrications," she says.

"I discovered that if you couldn't trust the media, you have to go directly and speak to the people."

"Being a woman was an advantage. I remember at the Istanbul Nato summit, President [George W] Bush took me by the elbow, because I had high heels and it was a gravel path, and we walked slowly along.

"I did all I could to tell him how important it was to enlarge Nato and to make sure that Latvia was included and how much progress we had made and how full of goodwill we were. 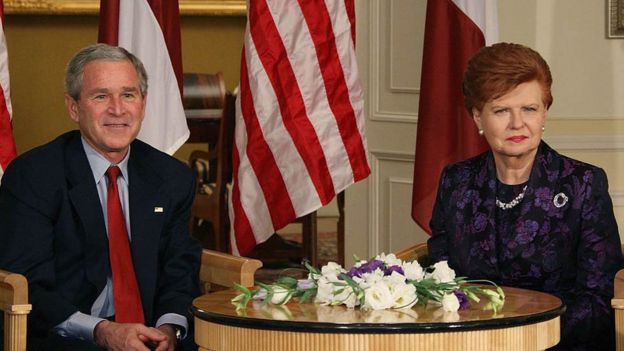 "We were walking slowly and enjoying ourselves and I was doing my best to pour as much Latvian propaganda into his ear as I could. I didn't think it hurt at all," she says.

Vaira's second term ended in 2007, a few months before her 70th birthday. She co-founded the Club de Madrid - an organisation of former leaders, with a mandate to promote democratic leadership and governance.

She also has a particular focus on women's empowerment. Still haunted by that professor in Canada, she knows the battle is far from won.